So I decided to get on TIGsource in a proper way. I posted on there years ago but drifted away. This time, though, I made a post about “Masques and Murder!” So I’m on there now, for realsies.

On my jaunt I stumbled upon “Ultima Ratio Regum”. I’m a pretentious twit, so I know this is Latin for “The Final Argument of Kings”, and that this was proudly engraved on the elaborate barrels of Renaissance cannons. (Renaissance princes were also, I think, pretentious twits.) So I click it, because this is totally my thing.

I’m now a little bit obsessed with this game.

So what is it? Here’s the author’s pitch:

Uncover an intellectual conspiracy to rewrite history in the most culturally, religiously and socially detailed procedural world ever generated.

A roguelike game inspired by the literature of Jorge Borges, Umberto Eco & Neal Stephenson, and the games Europa Universalis and Dark Souls.

This game is clearly interested in culture, the construction of grand narratives and the way civilisations express values. The macro plot will apparently consist of finding fragments of information or culture spread across the world to uncover that aforementioned “intellectual conspiracy to rewrite history”. (And what is Western culture but a massive “intellectual conspiracy to rewrite history”?) It’s also interested in how large-scale cultural values can affect things on a much smaller scale – this is from an interview with the author published recently:

So, “physically”, a nation with the “Isolationist” foreign policy will have walls around all its towns and may be reluctant to let strangers in; the “Zealotry” religious policy yields a religious building in every city district, whilst a “Free Trade” policy makes all city districts free to enter. At the same time, NPCs will differ in their reactions to the player and to other NPCs based on the policies of their nation – so, crucially, a policy (“agenda”) affects both the macro of the physical world the player faces, and the micro of NPC interactions.

The game does a lot of interesting things with cultural equivalence. When generating faces, for example, features that we’d consider “civilised” don’t necessarily get assigned to “advanced” nations: “any combination should be possible, as a means of undermining the idea that only “primitive” peoples will be found with certain cultural signifiers – in one game perhaps the people in the most technologically and militarily powerful empire all have extensive facial tattoos, for examples.”

The civilisations seem very “un-Western” to me. The names are unfamiliar, as though they come from a language totally distinct from the Romance, Greek, Germanic and Celtic language trees we’re all used to.

The flags seem strange to Western eyes, too: rather than the usual, European “equally-spaced coloured lines, maybe with crosses” system, you’re just as likely to get something a bit more unorthodox, perhaps with slightly unusual shapes or colours. I’m not sure whether these flags seem non-European to me because they actually flout European flag-design rules, or because they’re simply unfamiliar, though.

(Near-pointless tangent: go here for an insightful, intelligent and utterly hilarious TED talk on flag design. Go on. There are some awful, awful designs.)

The result is a world that, though beginning at “the end of summer in the Year 1679”, presents Western players with a radically different version of the Enlightenment: a world where the most advanced nations on Earth are just as likely to have dark skin as light, or to value earrings or tattoos, or have a flag that seems distinctly “other”. This is great because it naturally breaks down the idea that Europe and the West are superior due to some innate quality, and suggests that it was really just luck. I also love how this ties inseparably into the procedural generation of the world: the author, Mark Johnson, is showcasing games’ (and computers’) potential to model not just a situation or even a world, but an entire mode of thought via its algorithms.

That, though, is not the thing that has made me sit up and take notice.

In the interview, Johnson talks about how the avatar is presented:

although you play as a single character in Ultima Ratio Regum, I’m trying to emphasize the lack of power of your single character (in some ways) and to make the game about far broader cultural/societal/religious concepts/questions, rather than the very individualistic history that games tend to write.

Frankly, your viewpoint on this wide-ranging, procedurally epic world is astonishingly narrow: you can see this world through the single, focused lense of one character, represented by the “@” symbol. This feels incredibly limiting to me. At first, I was frankly astonished by the extent of the simulation: the game begins by generating the solar system, then the entire planet, complete with forests, river, resources, civilisations, ruins and histories. And then you are dropped into the world: 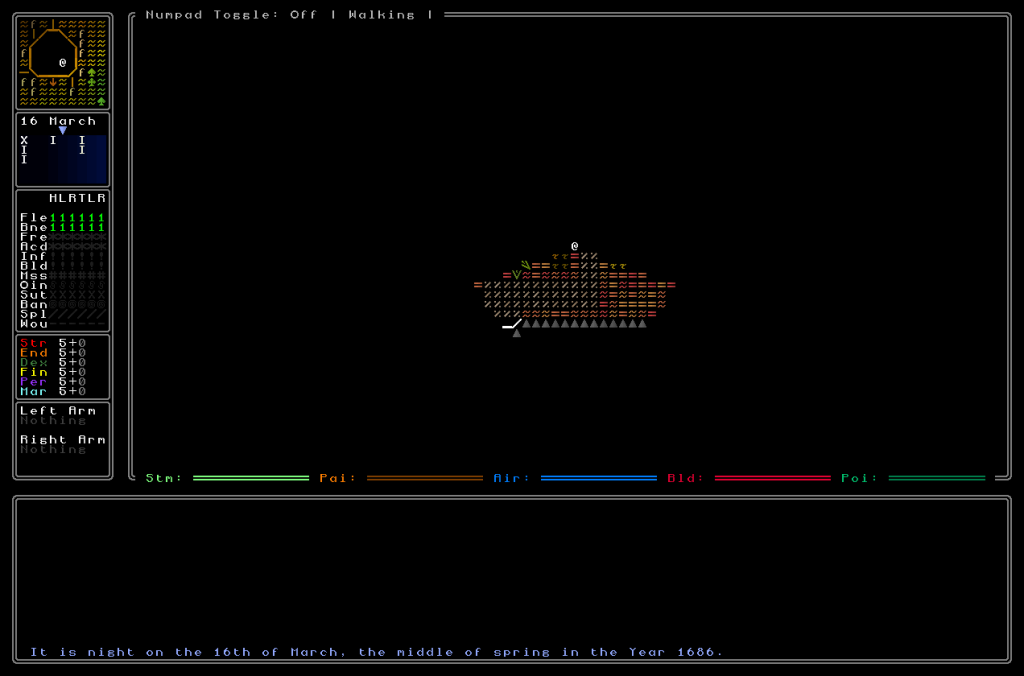 What am I looking at? Why is so much of the screen black? I’ll explain. The “@” symbol is me. And that tiny cone shape of coloured squares? That is my range of vision.

This feature might seem obvious to roguelike players, but that cone of vision feature perfectly sums up the player’s experience of the whole game. If you want to experience something, you have to see it firsthand. If you want to travel to another city, you have to physically walk there, which will take a few days. Your understanding of this grand system is limited by your own perceptions, and the limitations of those perceptions. No wonder it’s difficult to get a sense of the nation-wide impact of a cultural system: you can’t even look at something behind you.

I’m also intrigued by the “choose your nation” mechanic. When you start a new game, you get to choose which nation you were born into. Each nation has certain national policies.

I presume this system is based on that of Europa Universalis, which Johnson lists as an inspiration. In EU, you control an entire nation and can choose national ideas to give yourself bonuses. “Grand Navy”, for example, allows you to build a navy twice as big as usual. “Scientific revolution” makes technological advances 10% cheaper. In EU, these are ideas as seen through the eyes of the nation, or at the very least by the elites: the question here is “What can this idea do, logistically, for the nation as a whole?” The nation is seen as this self-perpetuating entity, using resources like capital or labour or soldiers to pursue its ends.

The national ideas in URR are totally different. The “Aesthetics” policy gives you +4 dexterity. “Exploration” reveals nearby population centres to the player. “Populism” gives the player’s party members +10% damage if they’re from the same civilisation. Here, the focus is not on these ideas as grand bonuses to the national character – “England is stronger for its naval culture” – but on how ideas change individuals within that culture: “I was a conscript, so I know how to use swords, knives and daggers.”

Ian Bogost wrote an article a few months back: “Video Games are Better Without Characters”. The basic gist is that while so many games have focused on characters – you know, Hero’s Journey, saving a loved one, revenge narrative etc. – games are really suited to simulation. That a game that simulates a city tells us about cities in some fundamental way; a game that simulates a country tells us about countries. Bogost’s point is that characters obstruct this, and make it hard for us to use the greater simulational potential of games.

It’s a point I found compelling, but URR goes one step further. As Johnson points out, the game shows us “the lack of power of your single character” – but it’s more than that. We are born into a world full of rules and histories and norms that we barely understand, and which we try to learn but can barely comprehend the origins of. Everything seems fully-formed, and yet we seldom understand why things are this way and not that way. Why are men seen as superior to women? Why is heterosexuality the “default” in our culture? Why are white people in positions of power while people of other races are generally not? It is possible to explore the world through the limited aperture of our senses, and try to find answers to these questions. But even as we do, and even as we tell other people about our findings, we’re constantly confronted with our own non-objective place in the world: I’m white, and that changes the advantages I have. I’m middle class, and that changes my cultural preferences. I’m British, and that comes with a huge number of accepted cultural norms.

None of us are infallible. Maybe we’re white. Maybe we’re conscripts. Maybe we’re proud of our army because our nation has made that a priority. By transforming the avatar from a fleshed-out character to a biased conduit, we’re confronted by this in a new way.

To me, this is the most interesting thing about URR: that it allows us to see how culture works, but from a uniquely personal perspective. That it simulates entire worlds and nations, only to ask: “So, how does this affect you?” Where the most difficult thing in the game, which is also its most fundamental mechanic, is to learn: to better understand, through your limited perspective, how the world came to be like this, and what forces are acting on it in the present:

I’m trying very explicitly to make the themes and the gameplay the same thing. You cannot complete the game without understanding the themes; and you can’t really get the themes without playing through them. The more the [player] understands the kinds of ideas about historiography and culture/semiotics I’m trying to convey, the “better” they will be at the game (in terms of skill).

I think this game is very interesting in its current incarnation. But when it is finished, it will be a very, very important work.

2 thoughts on “The world is a found object, and we are imperfect archeologists”