Get it on itch.io here.

Play a Renaissance noblewoman bent on revenge! Your family cruelly murdered, you take it upon yourself to slay the killers and free yourself from their abominable plot! Features: 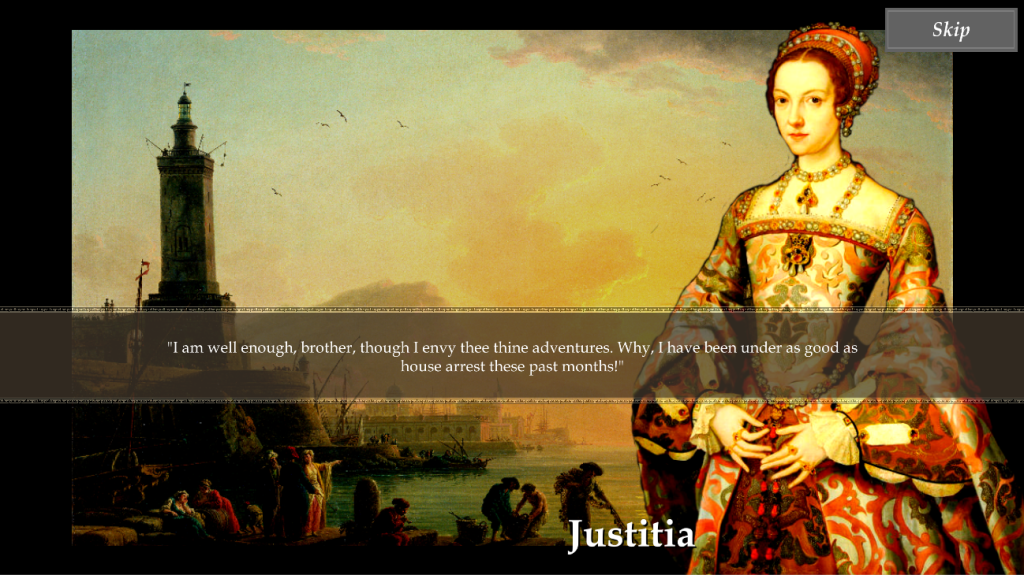 Update: I’ve just released version 1.01, which fixes a handful of bugs (and also makes the game a bit less problematic regarding sex work.) You can get the new version from the game’s itch.io page!

There is one bug I can’t fix: some people have reported playing for a while, quitting, and when they go to start it up again, it just crashes. This is normally caused by a corrupted settings file. The good news is, you can delete it and the game will make a new, clean one: the file is called “settings.gd” and is found (on windows) in “C:\Users\[username]\AppData\LocalLow\James Patton\Masques and Murder_”. The bad news is that the game forgets which endings you’ve completed, but that’s not a huge price to pay.

Musings: Back in 2014 I had just written about the closure of freeindiegam.es and was thinking about short but creative projects. “I should do a project like that,” I thought. “Something interesting and fun but with a short production cycle. I bet I could finish it in a month or two!”

18 months later, here we are. Oh how I suck at scheduling.

But on the plus side, I really like how it turned out! And other people seem to like it too. So it’s all lovely. Except for the brutal murder-theme, I suppose, which is not really particularly lovely.