I’ve been meaning to start one for a while but never got round to it. In fact, that’s not entirely true. My thought process was: 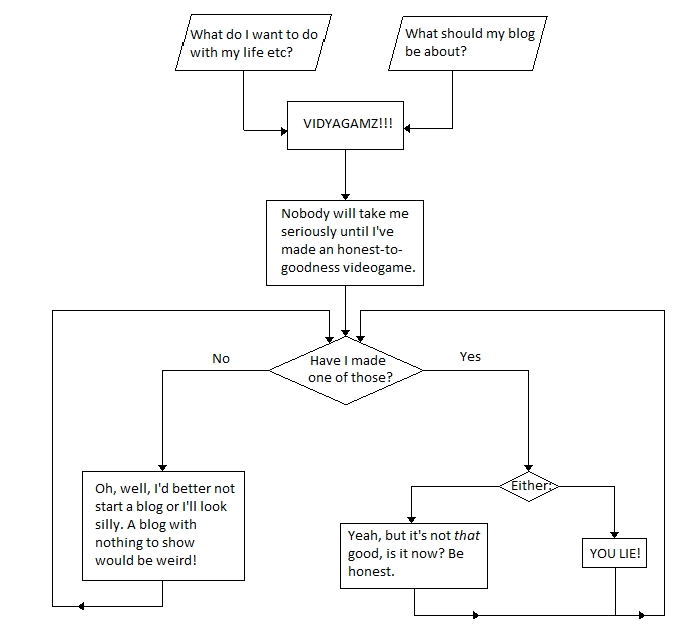 So a few things happened recently which made me shift gears a bit and actually start this thing. Hurrah! I will probably tell you about them, O ever-mysterious-yet-constantly-referred-to-reader.

For now, though, let me lay waste to some expectations:

I will not update this regularly. If this should occur, take heed: the end times are near. It would be accurate to say that I am never the most organised person in the room, and this is equally true if the room contains only me and my cat.

I either make videogames, or I would like to. I’m in an odd place right now where I’m not sure whether the things I’ve made count as actual bona-fide videogames that one would want to, for example, showcase on a blog. Whatever they are, though, this site will act as a dev diary for them. There may even be screenshots! Huzzah, I’m just like a real developer! (But not really.)

Whether I do or do not make videogames, I certainly think about them a lot. This may become a place where I jot that sort of thing down. I might even jot down things which occur to me about other things, such as films, Doctor Who, and whether fiction is an oppressive trap we don’t even realise has sprung or just jolly good fun.

Sometimes I am serious and sometimes I am silly. I reserve the right to be either, neither and both. Or any other combination I just missed.